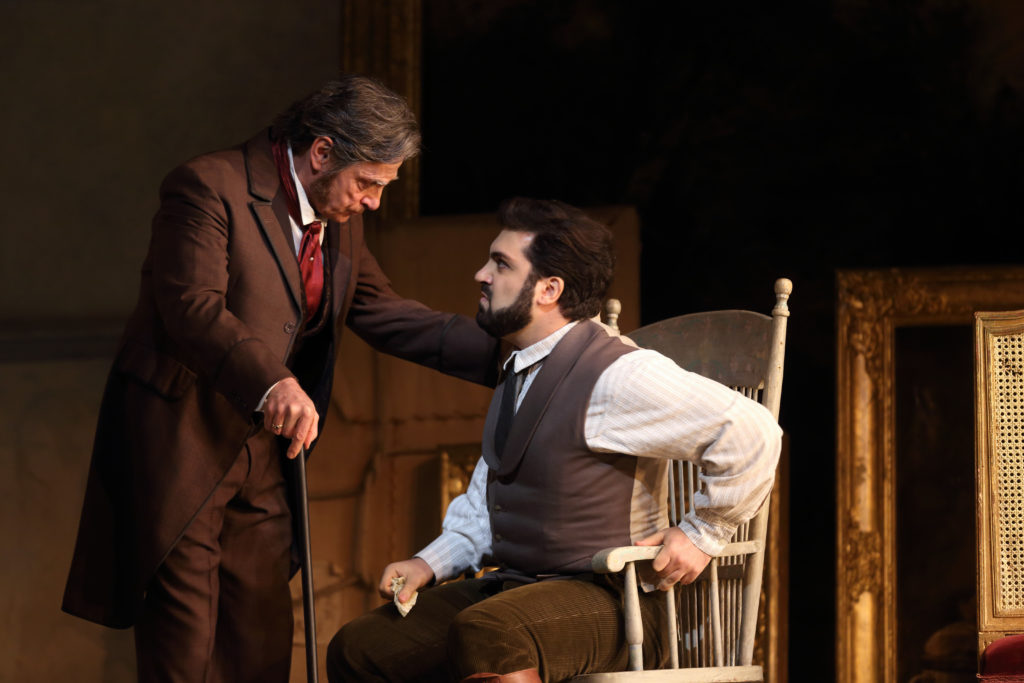 Aristotle, in the Nichomachean Ethics, distinguishes between hedonism, living for pleasure, and eudaemonism, living in accordance with wisdom and virtue. Witness Violetta (played by soprano Hrachuhi Bassenz), conflicted and torn. In Sempre libera degg’i, she advocates a life of pleasure. But in the opening scene of La Traviata, something of a bacchanalian affair, she tells Alfredo that she has never loved or been loved but that she fantasised about an ideal lover. Alfredo, in his aria Un di, felice, eterea, acknowledges that love, the “heartbeat of the universe”, entails both pleasure and pain. Violetta is evidently ambivalent about emotional dependence.

La Traviata is replete with the crowd pleasing arias and duets characteristic of bel canto. Warwick Thompson refers to the “cruel coloratura demands of [the aria] Sempre libera” (‘Why is champagne not mentioned‘, Official Programme). But after an understandably nervous start, Ms Bassenz warmed up and her vocal pyrotechnics were rewarded by a prolonged ovation at the end of Act 1. Liparit Avetisyan, as Alfredo, graciously accepted being upstaged.

Alfredo’s assertion that love is an admixture of pleasure and pain is amply confirmed in Act 2. Violetta’s rustic idyll with her lover is shattered by the arrival of Giorgio Germont (Simon Keenlyside), suitably sinister. In Pura siccome un angelo, he embodies bourgeois hypocrisy. And in the aria Di Provenza il mar, il suol, likewise, he employs every trick in the book to persuade Alfredo to return home, now appealing to nostalgia for his homeland, now to religion.

If opera, as Wagner maintained, is a total work of art (Gesamkunstwerk), acting is its weakest link. Violetta’s death from consumption, in the presence of the now remorseful Alfredo and Giorgio Germont, who belatedly realise that she is a saintly figure (see ‘The Saintly Courtesan’ by René Weis, Official Programme) left one strangely unmoved.

Like Loading...
This entry was posted in Cultural Matters, QR Home and tagged Aristotle, La Traviata, Verdi. Bookmark the permalink.