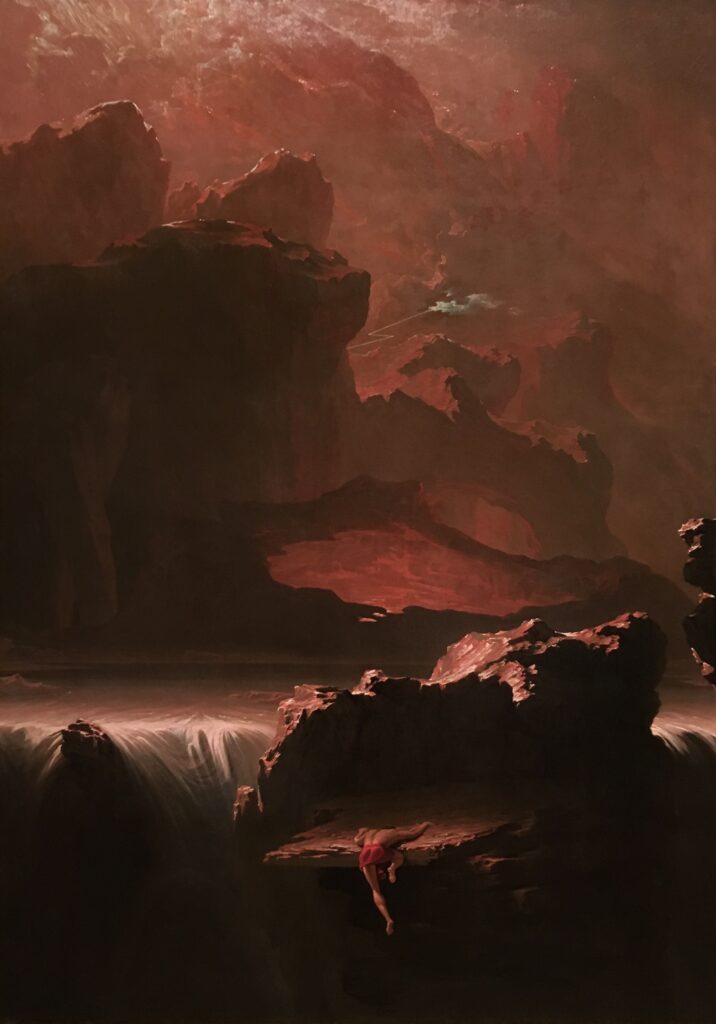 Sadak in Search of the Waters of Oblivion, by John Martin, credit Wikipedia

There is this New York City psychiatrist. Her name is Dr Aruna Khilanani. In a lecture to the Yale School of Medicine’s Child Study Center, no less, she likened whites to “demented, violent predators who think that they are saints or superheroes.” She then let the septic tank that is her mind overflow. Said Dr. Khilanani:

I had fantasies of unloading a revolver into the head of any white person that got in my way, burying their body, and wiping my bloody hands as I walked away relatively guiltless with a bounce in my step. Like I did the world a fucking favor. (Time stamp: 7:17)

For her murderous fantasies against the pigmentally deficient, Dr. Khilanani should have been criminally profiled by the FBI’s Behavioral Analysis Unit. This primitive reptilian brain might be a danger to the community waiting to happen. Instead, morality has been inverted. Rather than being hobbled by her deviant views, Dr. Khilanani has been approved and elevated at every step of her privileged romp through America’s institutions. Someone in authority invited her to give a talk to the nation’s top university, Yale, an intellectual shithole, really. Someone high-up approved of, even liked, the topic of this woman’s address, which was, “The Psychopathic Problem of the White Mind.”

A system originally designed to select America’s finest selected Khilanani to train as a healer, a psychiatrist, ministering to vulnerable others. This mental pigmy, whose expressed aspiration is to terrorize whites, has been put through America’s professional ringer. Khilanani is a proud product of America: she has emerged from an educational system that has approved of her at every step of the way. Prestigious medical bodies and institutions have given her the go-ahead to ply her profession.

Not unpredictably, Dr. Khilanani gained access to top American schools by impressing these academic hellholes with her “mind,” a fount of foul, anti-intellectual ideas and pursuits, which should lead to rejection and expulsion, but doesn’t.

Proudly stated, her professional goal was to take medicine to “where [it] intersects [with] race, gender, politics, sexuality, and class.” Someone in an elite hierarchy thought that a person who wants to dumb-down, tribalize and politicize medicine (and had cut ties with her white acquaintances) was not only fit to be accepted into the fold—but to be unleashed on a vulnerable subset of society: psychiatric patients.

This must be the focus of your ire: the American system, every dank nook and cranny of it, and the people who dominate it. Know where to focus your fury. Aruna ‘KhilaWhitey’, has been enabled by deep American institutional rot—a contemptible human being advocated racial homicide from a top American academic institution, which rushed to lend her its credibility and its megaphone. Still is. You might think that such a demented, diabolical diatribe from this individual, a qualified psychiatrist, would have resulted in a revocation of her license to practice. It hasn’t, nor will it, is my guess.

On the contrary. Yale decided to post the subintelligent, meandering of this ugly American Mind online. Bustling with pride, Dr. Khilanani has claimed that the bile consciously emitted from her mouth is but a therapeutic tool to help “hit the unconscious.” The idiot meant the subconscious. My point here is that the job of overseers and educators is to select the best people for plum positions, not the very worst people. Or, at the very least, to stop the latter from attaining the power of her profession and abusing it.

The American Idiocracy, however, is moving at breakneck speed to equate moral and merit-based institutions with “institutionalized racism.” So take my point to heart. Hold the System in contempt, do not join it, starve it of your support, of your funds and of legitimacy.

WATCH a video version of this column:

WATCH Ilana’s conversation with David Vance as to why “NY Psychiatrist Aruna Khilanani Is Right: Hatred Of Whites Is Here To Stay.”

Like Loading...
This entry was posted in QR Home and tagged Aruna Khilanani, Ilana Mercer, Yale. Bookmark the permalink.