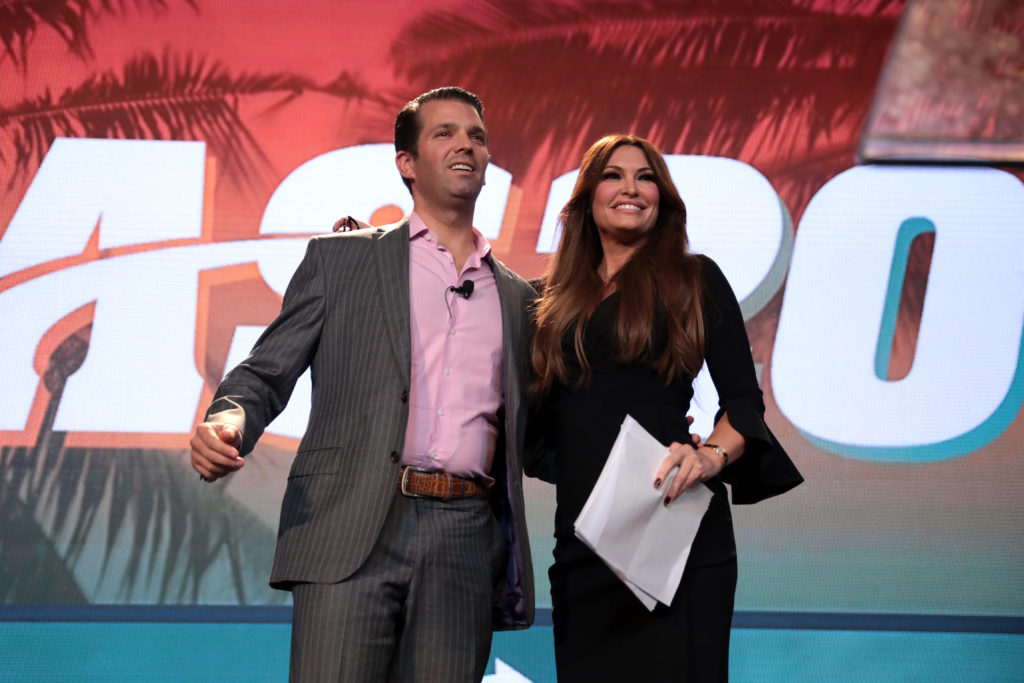 Beefcake Donald Trump Jr. and bimbo Kimberly Guilfoyle were on stage at UCLA to promote the president’s son’s “book,” when they were jeered by dissident Deplorables for shutting down the Question-and-Answer segment. “Book” here is in quotations to denote “so-called,” because the staple, ghost-written, political pablum, penned by ambitious political flotsam, relates to literacy as H. L. Mencken relates to conformity—i.e. not at all.

Predictably, Guilfoyle opted out of the conversational give-and-take demanded by her man’s hecklers, and went straight for the groin: “I bet you engage in online dating, because you’re impressing no one here to get a date in person.” Why “predictably”? Well, a supple mind may not be one of Guilfoyle’s assets.

Kimberley’s cerebral alacrity was seldom showcased when seated in Fox News’ legs chair. During one of her last televised appearances on “The Five,” a Fox News daytime show, Guilfoyle protested that, “the U.S. has already reduced its [toxic] ‘admissions’ enough.” Herewith, Guilfoyle, verbatim, in her own words: “So, we can keep doing what we’re doing. We can keep reducing our admissions. …” To Make English Great Again, you reduce emissions, not “admissions.”

For a while, it even seemed that Trump, looking for curve appeal in a press secretary, was going for Guilfoyle. She certainly thought so and said as much, implying, at the time, that she herself is “a great communicator … with deep knowledge.” And no; I do not digress. This all goes to Guilfoyle’s knee-jerk, flirty, aim-for-the-groin reaction to her hombre’s hecklers.

Tellingly, the taunting of Donald Jr. by dissident Deplorables was covered very differently by the American Daily Beast and the British Guardian. Descriptions of political positions and personalities were prefaced by the Daily Beast with “edifying” editorializing. The Beast described the hecklers as “fringe-right.” Their alleged instigator and inspiration was said to be “a white nationalist.” The Daily Beast deemed perfectly legitimate demands from this disgruntled audience for a “Q and A” and for “America First,” tantamount to a right-wing insurrection or civil war. Discrediting dissent is all in a day’s work for the American press.

What do you know? The hecklers at Trump Jr.’s book-flogging were also known, to the Daily Beast at least, as “Holocaust deniers.” As far as this reader can tell, however, the group taunting the empty suits on stage for refusing to answer questions said not a word about the Holocaust. Nor had the disrupters been interviewed by the Daily Beast about their views on the Holocaust.

More to the point: why is participation in our democracy predicated on one’s views on the Holocaust? What the hell does an individual’s opinion about that topic have to do with his right to solicit answers from members of Donald Trump’s politically active dynasty? I say this as a Jew whose family tree was truncated by the industrial-scale mass murder of millions of Jews that was the Holocaust.

Yes, Deplorables who aren’t dittoheads have dared to question The Donald.

Many a Deplorable, among them Ann Coulter and Michelle Malkin, has refused the dittohead designation. Instead, these dissenters perceive President Trump and his unelected emissaries as reneging on doable promises to build a wall, to place a moratorium on legal immigration, and put the United States and its long-suffering people first.

But to the Daily Beast, these positions are reason to libel those who hold them as awful, Israel-averse anti-Semites and Holocaust deniers. Trump voters inquiring about campaign promises hitherto unkept were wrapping “racist, homophobic, or anti-Semitic messaging” in the raiment of Trumpism, we were told. (My paraphrase. Beast journos can’t write.)

Contrast the Daily Beast’s emotive, ad hominem laced invective with coverage of the same event by The Guardian, a British daily newspaper. It was not racists who “drowned out” Trump Jr. and his paramour but “diehard Make America Great Again conservatives,” reported The Guardian. It was not the adjudication of the Holocaust that these “hostile conservatives” were demanding, but the need for a “Q and A! Q and A! The fury of the “fringe group” was not white-hot racism, but that “of America Firsters who believe the Trump administration is captive to a cabal of internationalists, free-traders, and apologists for mass immigration.”

There was a “factional rift on the Trump-supporting conservative right,” reasoned The Guardian,” intelligently, quipping further that hardly any “triggered” left-wingers were present to “clamor for Trump Jr’s silence.”

In other words, by skedaddling, rather than staying to face the music, the president’s son had sundered his own case that it was he who was “willing to engage in dialogue, but that it was the left that refused to tolerate free speech.”

And, OMG! Contra the new, woke journalistic credo established by the Daily Northwestern; The Guardian interviewed two dissenters and published their pungent criticism, namely that “the pro-Trump movement was being infected with ‘fake conservatism’ and that the president himself was at the mercy of a cabal of deep state operatives who wouldn’t let him do many of the things he campaigned on”: “We wanted to ask questions about immigration and about Christianity, but they didn’t want to face those questions.” Not a word about the Holocaust.

As for Donald Trump Jr. and his gal pal Guilfoyle: dumb in isolation—worse in combination.

Ilana Mercer has been writing a weekly, paleolibertarian column since 1999. She is the author of Into the Cannibal’s Pot: Lessons for America From Post-Apartheid South Africa (2011) & The Trump Revolution: The Donald’s Creative Destruction Deconstructed” (June, 2016). She’s on Twitter, Facebook& Gab. Latest on YouTube: “How Democracy Made Us Dumb”.