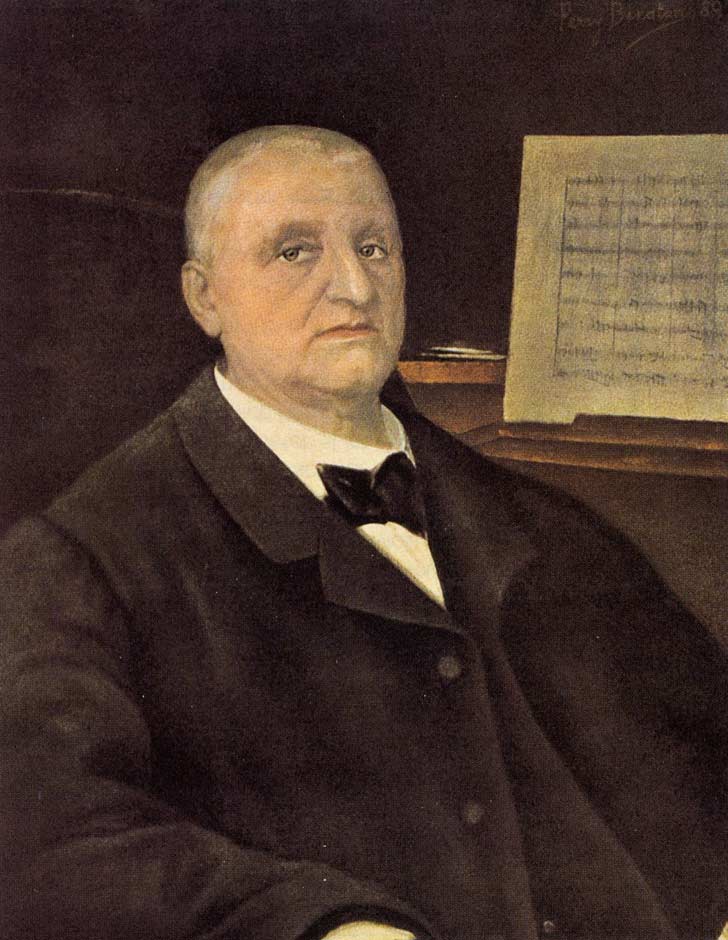 STUART MILLSON is re-entranced by the magnificent Eighth

The recording of Bruckner’s Eighth Symphony by the Saarbrucken Radio Symphony Orchestra conducted by Stanislaw Skrowaczewski is not a recent issue. Nor is it considered one of the front-rank performances, towering alongside those of Furtwangler and Karajan, Giulini and Gunter Wand, or more recently, a reading by Pierre Boulez. However, I have decided to write about it for Endnotes, because it is – in my estimation – one of the most carefully-created and emotionally satisfying of all the versions in the Bruckner discography.

Anton Bruckner’s Eighth Symphony was premiered in 1892 under the baton of Hans Richter, the great Wagnerian conductor. Work began on the piece in the middle of the 1880s, and like many of the composer’s works, underwent numerous revisions. Bruckner was born near Linz in 1824, and spent many years as the organist at St. Florian – his life devoted to religious music, teaching, composition and a veneration of Wagner. He also had romantic feelings – but nothing more – for one or two of his young female students, but as far as we know, these emotions were never reciprocated, and the musician remained a somewhat awkward, solitary, bachelor figure – an elderly gentleman of Upper Austria; the man who locked up the rural church when Sunday was over. But as an organist, Bruckner was one of the great performers of his day, and came to London to play on the magnificent instrument built for the newly-opened Royal Albert Hall. A somewhat naïve figure (known to present a coin or cakes to conductors who performed his music well – and dedicating his Ninth Symphony to God), he was nevertheless a giant of European music, honoured by the Emperor of Austria, and living out his days in lodgings provided by the Emperor.

Bruckner’s nine symphonies (the last of which was unfinished) represent a transition in music; taking symphonic sound and organisation away from the world of Beethoven and Brahms, and into a more troubled landscape overshadowed by the lengthy music-dramas of Wagner, and finding a pathway for Gustav Mahler (who studied with Bruckner) and the sumptuously-orchestrated, febrile world of the early modernists, such as Arnold Schoenberg. Although by no means atonal, there are passages of great disturbance in Bruckner. There is also a sense – not of night-time exactly – but of twilight, or a supernatural half-light; or of mountainous places or buildings touching the heavens, but with cloud, or storms swirling about them – a threatening, demonic undercurrent to the cumulative force, certainty, and affirmation of the music.

It is the latter feeling that I find in the Eighth Symphony, possibly one of the greatest works ever written, alongside Bach’s Passions, the Mozart Requiem, or Beethoven’s Choral Symphony. The first movement alone seems like a symphony in its own right: a low, suspended-in-space grumble of brass and heavy, dark, cellos and basses, leading to an equally slow, but determined ascent to some never-to-be-gained summit – similar in ghastly grandeur to the mountain scene in Das Rheingold when Wotan confronts the dwarf, Alberich. The Saarbrucken Radio Symphony Orchestra players perform this movement with utter conviction, restraining themselves from unleashing their full power until the very last (and thus, perfect) moment. The Saarbrucken brass section seems to me to be the near-equal of the great ensembles of Berlin and Vienna, which are usually credited with providing the optimum Bruckner performances; and under Skrowaczewski’s direction achieve what can only be described as sonic splendour. Skrowaczewski himself is a very interesting figure: the son of a brain surgeon, who at first considered a career as a pianist, rather than a conductor – and who, as a maestro, led the Minneapolis Symphony Orchestra in America, and appeared in Britain with the Halle Orchestra (in Bruckner’s Seventh Symphony) and with the Philharmonia at the 1984 Proms, in Beethoven’s Ninth Symphony. He has an austere, serious look – and dare I say it, he resembles a figure from Cold War Eastern Europe, although he belongs to a generation of musicians (including, for example, Vaclav Smetacek) who existed for the seriousness of music, rather than for any marketing opportunity. The unrelenting quest for Bruckner, for musical perfection has made Skrowaczewski the extraordinary force that he is.

The second movement of Bruckner’s Eighth breaks the tension of the previous 20 minutes, with a joyous, rushing mountain torrent – a scherzo which is said to contain the freeborn, rustic simplicity and life-affirming spirit of a German character, or more correctly, the character of Germans, known as “Deutsche Michel”. Austro-German music somehow mirrors the defiant, determined (some might say strident) tone of their spoken language, but all of these characteristics give voice to Bruckner’s unstoppable power. The heavy Saarbrucken orchestral tone now assumes something of the element of silver or mercury, but by the time of the third movement – the longest section of the work – we are drifting beyond this earth, into space itself, feeling our way past planets and stars, or so it seems. I cannot think of anything like it in all music – this vapour, this transmigration of souls. And just as it seems that we can go no further, Bruckner sets in motion a finale, whose shuddering, short, stabbing initial steps set a scene for a succession of curiously disconnected, unexpected happenings, but which all lead in the end to a final attainment of darkness-to-light brilliance. The monumental build-up of still-unspent energy and forces, which any other composer might have sacrificed much earlier, is one of Western music’s great legacies. It is more than honoured by this German orchestra and Polish conductor.

Originally issued by Arte Nova, the recording also appears on the Oehms label. Recorded at the Kongresshalle, Saarbrucken, October 1993. The Arte Nova recording was a co-production with the Saarlandischer Rundfunk.