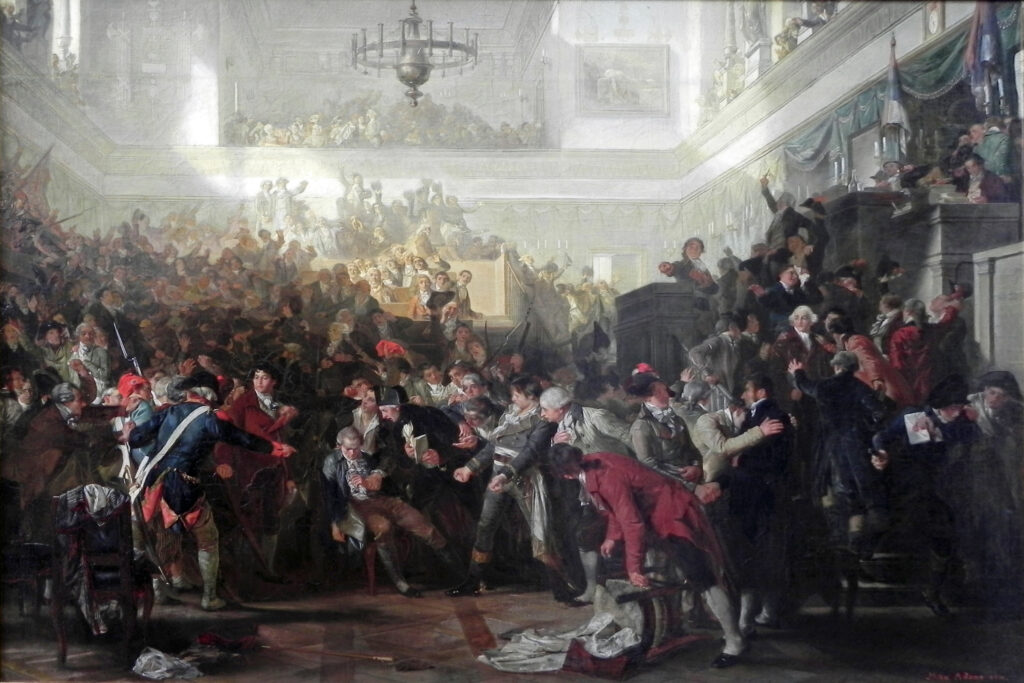 As Professor Gauchet sagely observes in his new book, “All the arguments that were employed by the revolutionary rhetoric of the next two centuries”[1] were prefigured by Robespierre, as in his keynote speech to the Convention of 28 October 1792. Indeed, something akin to democratic centralism and the dictatorship of the proletariat emerged in France during the ascendancy of the Committee of Public Safety, to which Robespierre was appointed in July 1793. Excesses, such as the September prison massacres, were justified as part of a popular movement. During the Terror, Robespierre maintained that an enlightened and beneficent minority was acting on behalf of the majority. His objective was always “the empire of virtue, achieved through democratic and republican government”. [2]

Lenin considered Robespierre a “Bolshevik avant la lettre”. Although eminently bourgeois himself, Robespierre anticipated Marx’s class analysis. He believed that corruption invariably accompanies wealth, that incorrigibly ambitious and greedy men had latched on to the Revolution which they viewed “as a trade and the republic as a spoil”. “Virtue is always in the minority on earth”. [3]  “The motives of the people”, in contrast, were at heart “always pure”, for the people love justice and equality, the public good over self-interest. The author thinks that Robespierre saw himself as “a foremost example” of the political virtue “incarnated in the people” and highlights his “self-idolizing impulse”. [4]

Robespierre discerned a “single foreign conspiracy [but] with two faces”, to wit, the “Indulgents”, or lukewarm revolutionaries (Dantonists) and the “Exagérés, or extreme revolutionaries (Hébertists). When Hébert accused the Queen of incest with her son, Robespierre called him an “imbécile”. “All the factions”, he insisted, “must perish together”. The Hébertists campaign for de-Christianisation represented for Robespierre a foreign inspired attempt to divide the patriots. The French people were deeply attached to the notion of a supreme being, in his estimation.

The author considers Robespierre’s conspiratorialism as delusional, as “the dark side of a luminous resolve to bring the Revolution to a successful conclusion” and thereby establish “a truly authentic republican regime”. [5]  Robespierre proposed that without terror, virtue, the subordination of self-interest to the public good, is powerless. According to Professor Gauchet, the trial of the Dantonists, proceeding from a spurious indictment drawn up by Saint-Just, was the “least glorious” episode of Robespierre’s career. Danton and Desmoulins were falsely accused of aiding hostile foreign powers and the remnants of the aristocracy. Are you “in no way criminally responsible for not having hated the enemies of the fatherland?”, Saint-Just asked them. Robespierre’s conception of a people, “united in its devotion to country”, was for Gauchet also delusional, given the profound ideological divisions in France between Paris and the provinces, and between the Jacobin activists (a self-styled avant-garde) and the peasantry, many of whom remained steadfastly royalist.

Professor Gauchet emphasises Robespierre’ s ambivalence about executive power which he had consistently opposed when exercised by the monarchy, then by the Girondins. Power, he had then maintained, encourages pride, selfishness and corruption. In late 1791, he opposed declaring war on Austria on the grounds that war encourages dictatorship. The internal and external threats to the Revolution, however, convinced him of the need for strong government. “Let us make terror the order of the day”, demanded a group of Jacobins in the Convention. Robespierre concurred and he supported the Law of the General Maximum, which regulated prices and wages (although the Jacobins remained wedded to private property and free trade). He made a sophistic distinction between a constitutional government which preserves the republic and a revolutionary government which founds and protects it. The former protects the individual from abuses by the state. The latter protects the state from those who attack it. For the author, the French Revolution was a tragedy, “proof of a terrifying inability to realize the highest and most noble of human ambitions, namely, the ambition of a people to govern itself”. [6]

Like Rousseau, Maximilien de Robespierre believed that “liberty and virtue settled for a brief moment in a few parts of the world” and that Sparta, in particular, “shines like a flash of lightning in an immense darkness”. [7] But ultimately, he could discern “No light, but rather darkness visible”.

Like Loading...
This entry was posted in QR Home and tagged Darkness Visible, Marcel Gauchet, Robespierre. Bookmark the permalink.