Exuberant conductor Evelino Pidò elicited a spirited performance of the compelling prelude to La Fille du Régiment from the orchestra of the Royal Opera House. It was a portent of the riches to come.

In comic opera or farce, we are a long way from verismo. As Zoë Anderson points out, “…we know how things are likely to go” and, “We recognise the characters as types…” (‘Don’t be a Duchess’, Official Programme). Marie, played with gusto by the feisty French soprano Sabine Devieilhe, is one such stock type, to wit, the mislaid baby, brought up in this case by soldiers. This lends itself to a classic opera device, the attempt to transform her into a lady via a music lesson. And to a trading riches for happiness trope. Marie’s mother, La Marquise de Berkenfeld (mezzo-soprano Enkelejda Shkoza), is also a stock type, “a grand dame with a past”. Essentially frivolous and egotistical, she turns out to be Marie’s mother, the product of an affair with Marie’s late father. Sulpice Pingot (baritone Pietro Spagnoli, heavily made up), the sergeant with a heart of gold who found Marie on a battlefield as a baby, is another recognisable archetype.

Mexican tenor Javier Camarena (Tonio) is described in the programme notes as a “bel canto expert”, possibly an understatement. Luciano Pavarotti underlined the importance in bel canto of legato, a technique whereby the notes are tied smoothly together, which Camarena has manifestly mastered. His rendition of the famous aria Ah! mes amis, quel jour de fête!, replete with top C’s, was the highlight of the evening, rivalling historic performances by Luciano Pavarotti, Alfredo Kraus and, more recently, Juan Diego Flóres. The audience and conductor demanded an immediate encore. Sabine Devieilhe’s voice seemed somewhat weak by comparison. 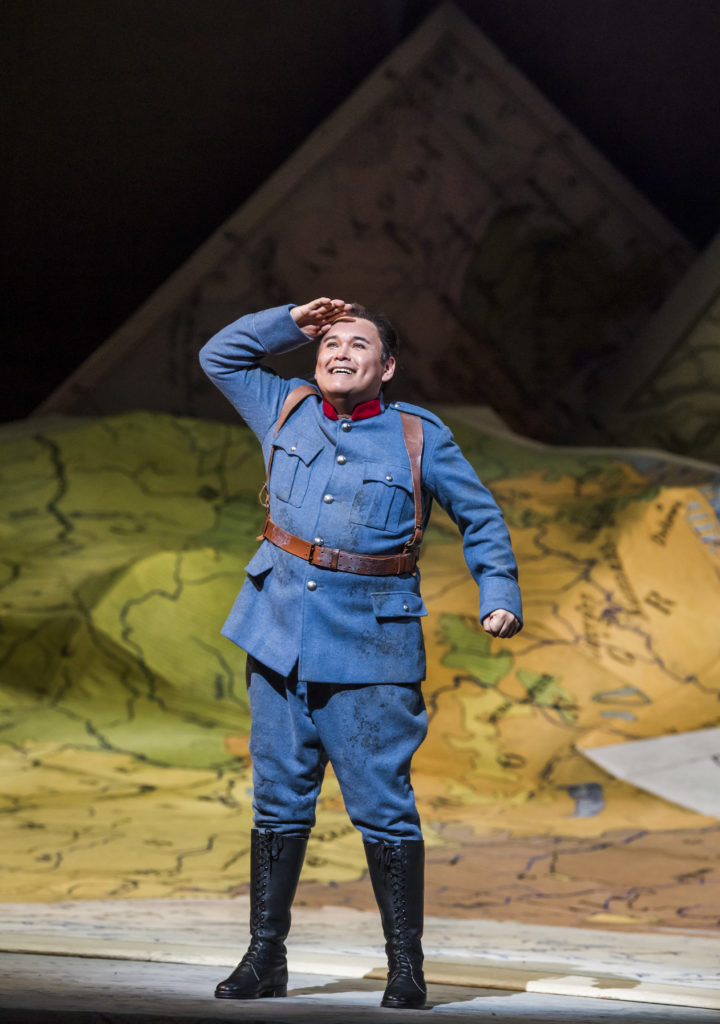 In Laurent Pelly’s ingenious production, the setting has been moved from the Napoleonic Wars to the Tyrol during World War One. The mountainous terrain is made up of maps of the war zone. As Susan Templeski remarked, “Pelly’s production is full of delightfully comic touches”, such as regimental vivandière Marie “spud bashing”, or the line of long johns that she has just washed, or Tonio’s final entrance astride a tank (‘The Metropolitan Opera – La Fille du Régiment’, Thursday May 8th, 2008). In a word, éblouissant.