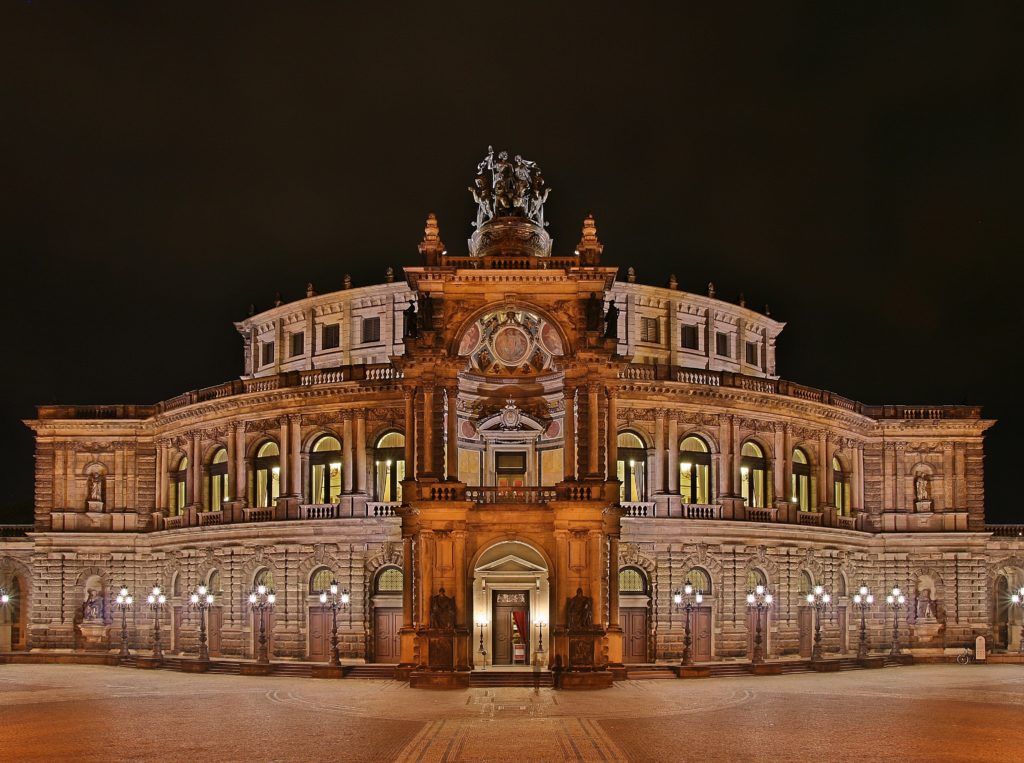 The Ring, modelled after ancient Greek drama, was originally presented as three tragedies and one satyr play. Therefore, the Ring proper begins with Die Walküre (The Valkyrie) and ends with Götterdämmerung (The Twilight of the Gods) while Wagner called Das Rheingold a ‘Vorabend’ or ‘Preliminary Evening’ and Die Walküre, Siegfried and Götterdämmerung were subtitled First Day, Second Day and Third Day respectively. The works are loosely based on characters from Norse sagas and the Nibelungenlied (The Song of the Nibelungs), a German epic poem written in the early 13th century by an unknown Austrian from the Danube region.

Dresden, however, harbours a special place in the history of the Ring inasmuch as Wagner first thought about writing about the legend of the Nibelungen while working in the city as Kapellmeister to the Saxon court. In fact, it was at Dresden that the first reading of the draft libretto took place.

It is entirely apposite therefore to see the Ring in this city. The production was first seen at the Semperoper over fifteen years ago, with Das Rheingold and Die Walküre receiving their premières in 2001, while Siegfried and Götterdämmerung followed a couple of years later.

When the curtain went up on Das Rheingold, we see row upon row of theatre-style seating covering the whole area of the Semper’s stage in a wave-like pattern representing the waters of the Rhine. Wotan and his fellow gods scurry to their seats to witness the unfolding drama of the Rhinemaidens. Shaven headed and attired in long white robes, they tell the legendary tale of the Rhine’s secret treasure portrayed in this production as an enormous golden ball, while tantalising and teasing Alberich, chief of the Nibelung, with their alluring charms. The famed trio – Christiane Kohl (Woglinde), Sabrina Kögel (Wellgunde) and Simone Schröder (Flosshilde) – sung and acted their roles to perfection.

The opening music of Das Rheingold, with its famous and distinctive E-flat chord held for the first 136 bars, evokes the mystery of the Rhine. Slowly those haunting and tingling opening bars give way to a ripple of broken chords and arpeggios suggesting the gentle movement of water and dawn bursting through brilliant rays of sun. Lighting designer Wolfgang Gussmann, working in partnership with Ms Frauke Schernau on costumes, created an economical and imaginative set placing the overall action within the confines of a theatre. The struggle for the ring occurs within the auditorium.

Those characters not involved in action on the stage become members of the audience. When Wotan leads the Gods to Valhalla (designed in the style of a Greek classical temple) the rainbow-bridge is a builder’s ramp positioned above the theatre seating. Loge was seen in his seat enjoying a precious moment with Erda (Goddess of the Earth) – sung by Janina Baechle, who has a rich and warm mezzo-soprano voice. They capture the attention of a nervous looking Wotan as he enters his new kingdom for which he has paid a heavy price.

Overall, the cast was on top form. Kurt Streit as Loge possesses a strong and authoritative tenor voice appearing on a red-painted, fork-lightning prop lowered from the gridiron, wearing red-framed spectacles, sporting a red scarf and a red quiff. His whimsical mannerisms matched his pyrotechnical magic as befitting the God of Fire. The duo who played the Giants – Georg Zeppenfeld (Fasolt) and Karl-Heinz Lehner (Fafner) – exhibited both vocal technique and presence. Padded out and adorned with pork-pie hats they moved awkwardly to the sound of heavy chords.

The dual role of Wotan/The Wanderer was brilliantly performed by Ukrainian bass, Vitalij Kowaljow, while Christa Mayer as his long-suffering wife, Fricka – Goddess of Marriage – gave a thoughtful reading of her role. Freia (Regine Hangler) put in a dramatic and confident performance.

The pastel-coloured theatre seating used in Das Rheingold gave way in Die Walküre to bright red seating set out in an arc-shaped formation in the scene in which Brünnhilde – suitably adorned like the rest of her Valkyries with flaming-red hair, waistcoat and trousers – was encircled by fire on her rock. But there was no actual fire and, indeed, no actual forest either in act II. Instead, a steadily-increasing volume of glowing red light crept over the stage while the Warrior Maiden’s rock turned out to be a large and brilliant white ball.

Petra Lang as Brünnhilde (the first time that she has sung the role at the Semperoper) was particularly effective in her tête-à-tête with Wotan in which he explains the vagaries of power and love and relates the story of the Nibelheim curse, the power of the ring and how Erda gave birth to his favourite Valkyrie. Their final farewell in the last act of Die Walküre was a heart-wrenching moment. Both singers put everything into this well-loved scene, with thoughtful and exciting playing supervised by Maestro Thielemann in the pit.

In the opening act of Die Walküre, Georg Zeppenfeld as Hunding, dressed in a sharp suit, delivered a fine reading of this suspicious and sinister character. Peter Seiffert and Elena Pankratova stamped their credentials on the demanding brother-sister roles of Siegmund and Sieglinde

In the Ring, power is the name of the game, especially in Siegfried, with Mime lusting for it and mirroring the boyish and unworldly Siegfried every inch of the way to get the ring and thereby rule the world. The German tenor Gerhard Siegel, who made his début in this role at Covent Garden in 2004, flourished in the part.

When Siegfried bursts into Mime’s scruffy and unkempt forest hut he is clutching a cuddly toy, with fragments of metal – failed attempts by his scheming guardian to forge the sword Nothung – scattered about. The act continued with The Wanderer and Mime challenging each other with tricky questions that showed not just the quality of their singing but their acting ability too. In the forging of Nothung, the fire was evoked, as throughout this production, by simple lighting effects.

This momentous and well-loved scene culminated in the demise of Fafner, with Georg Zeppenfield deploying the depths of his solid bass voice. The dragon was operated by an eight-person team, while Fafner’s forest den was squeezed into a fairground-style booth.

The Woodbird was radiantly sung by Tuuli Takala off stage and acted by Emilian Antoci who also appeared in a doppelgänger role as Young Siegfried. And that delicate moment in which the Woodbird – who, incidentally, saves Siegfried’s life telling him not to drink Mime’s drugged potion – informs him about the whereabouts of his beautiful bride, it was given a different angle by Mr Decker who simply portrayed her wearing a flaming-red dress.

The concluding scene of the opera was wonderfully sung by Stephen Gould and Petra Lang with Ms Lang’s voice radiating around the ornate, four-tiered auditorium of the Semperoper. But in Götterdämmerung it was different. Ms Lang lacked the necessary fire and passion required in the Immolation scene. Her voice projection was not sufficiently strong and forthcoming.

Nonetheless, the opera was in keeping with the overall style and presentation of the cycle, with Gunther and Gutrune, played by Martin Gantner and Edith Haller, dressed in evening wear and sipping champagne in the Gibichung Hall which was adorned with a large panelled window offering a romantic view of the Rhine Valley. Stephen Milling (Hagen), their half-brother and bogus marriage broker, engages in an incestuous relationship with Gutrune. Milling played his part to the full – mean, demonic and forceful in turn.

Christa Mayer, dressed in a military coat, put in a strong and confident performance as Waltraute. But when the Rhinemaidens eventually recover the ring, there is a departure from the original libretto, for Brünnhilde does not throw herself on Siegfried’s funeral pyre but simply gives it back with The Wanderer looking on. They hold it high above their heads entwined in a statuesque group reminiscent of Antonio Canova’s neo-classical sculpture, The Three Graces.

In a further departure from the libretto, Gutrune revenges her brother’s death by spearing Hagen to death, the latter fighting for the ring to the bitter end, before collapsing herself in the turmoil of the ending of the Gods and their beloved home, Valhalla.

Simplicity rules. In the scene in which Alberich boasts to Wotan and Loge about the powers of the Tarnhelm, the magic helmet was a golden-coloured bowler-hat. The Giant, likewise, was portrayed by the hat being suspended high in mid-air, while the croaking Toad was represented by the hat being hurriedly passed between Alberich and his two nosey visitors. As Wagner memorably observed, ‘imagination creates reality’. 1 Response to The Ring, at Dresden