Reflections on a broken world Reflections on a Broken World

Tikkun Olam, according to the blurb on the rear cover, is ‘the most important collection to date’ by Leo Yankevich, who is apparently ‘among the greatest living poets in the English-speaking world’. Insofar as a critic should be concerned with blurbs, this is poising the collection for scrutiny: that Mr Yankevich is to be ranked with Paul Muldoon and Geoffrey Hill is somewhat doubtful.

What may well strike the reader of Tikkun Olam more than any single poem is the book’s cover: an Orthodox cross planted in a pile of skulls, set in stark black and white – the slim volume evidently ‘gives [a] voice’ to the innumerable martyrs of Communism. We readily recall Siegfried Sassoon’s ‘On Passing the New Menin Gate’: ‘And here with pride/ “Their name liveth for ever”, the Gateway claims./ Was ever an immolation so belied/ as these intolerably nameless names?’ Whether one poet – one man – can ‘give voice’ to so many dead is perhaps a vain proposition. Anyway, the real question (one would hope) is not how effective Tikkun Olam is as an anti-communist propaganda piece, but rather, what is the quality of Yankevich’s verse?

The one incontestably sublime poem in the collection is ‘Butugychag’ (p.47), written about a Soviet labour camp in Kolyma. It epitomises Yankevich’s gift for understatement. Approaching the abandoned Commandant’s house, he writes,

… we behold the spacious balcony,
the broken panes of the enormous window,
and the sun-bleached, rain-worn wood of the stair,
built for the little man from the Ukraine
who liked to sing in Russian and in Yiddish
because, we are told, he enjoyed the view there

The view is probably of the tin mine, where 380,000 prisoners died over the course of ten years. But even when unaware of those details, we know this was certainly an evil place, and the poet’s casual, rather attractive description of the old house adds to the horror of the scene. Yankevich’s mastery of the language is unquestioned in such shocking, blasé ruminations on Soviet brutality.

But at other times, his method of understating falls disappointingly flat. For instance, the ‘Sarajevo Sonnet’ (p.43) runs,

…in someone’s rib cage,
in a sunlit temple without a steeple,
two tiny beetles in the place of people,
(their love too pure to ever turn into rage,
too tried and true to ever fail or falter), …

I’m more struck by the fact that Yankevich goes out of his way to say that the temple lacks a steeple. A Jewish or Pagan temple doesn’t, in my mind, typically bear a steeple, which causes some dissonance with the poetic imagination. One hazards to guess Yankevich used ‘temple’ instead of the more acceptable ‘church’ or ‘cathedral’ to accommodate his metrical scheme of eleven syllables per line, but that shouldn’t excuse the forced image. On the other hand, if some primitive Slavic religion used steeples in their temple architecture, I don’t think it is reasonable for a poet to expect his reader to be aware of the fact. Likewise, the idea of beetles having an intimate love affair is underdeveloped. If Yankevich hopes for a Romantic-Kafkaesque blend of metaphors, two lines won’t suffice to this end. At least in this instance, it can’t be said that less is more.

The most interesting piece in the book is ‘Lorca’s Death’ (p.14). Franco’s army executed Lorca for being a communist, a homosexual, or both – though it is now generally believed that he wasn’t affiliated with the Popular Front at all. If I am not mistaken, Yankevich is drawing attention here to some of the more ambiguous ‘martyrs of communism’. The Spanish Civil War was provoked partly because the radical vanguard leading the Spanish Republic aligned itself with the Soviet Union, much to the distress of conservative and moderately leftist Spaniards. It’s a fascinating idea for a poem, and certainly the closest Yankevich comes to ‘speaking for’ the victims of Stalinism. And, of course, we have a fine example of understatement: after surveying the graves of dead nuns and altar boys, the poet’s companion says (of Lorca): ‘For this we fired two shots/ into the faggot’s rear’. The poet seems to suggest that the circumstances of the War drove Spain’s greatest artist to a tragically inconsequential death. There is a compassion and conflict in the poem that marks it as a fine example of wartime elegy. 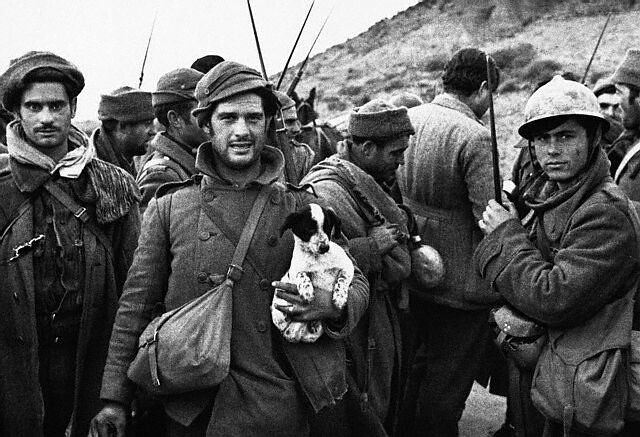 ca. 1937, Spain — A group of Republican soldiers talk to journalists during the Spanish Civil War, including the American novelist Ernest Hemingway (seen with his back to the camera), who served as a war correspondant. — Image by © Hulton-Deutsch Collection/CORBIS

We shouldn’t neglect the poems on events Yankevich experienced first-hand. Much of the collection, unfortunately, repeats many of the clichés about the hardships endured by prisoners, victims, and combatants in 20th century war – History Channel details given with a beatified tone. For instance, ‘Veteran’s Hospital’ (p.27):

Some nights are never-ending hells
for these old veterans in our care.
We do not hand out pills, but shells,
as out of battlefields they stare…

Most of that has been done before, and done better by the poets who lived through the experience. But that lived experience works to Yankevich’s advantage when we move closer to the 21st century. There’s a brilliant, fresh verse titled ‘Spreading Democracy: Serbia 1999’ (p.65). The closing stanzas run,

…he cannot tell
which was whose face.
High over hell,
his stealth’s black wings
still mock the night,
and fallen things
in morning light

You died with tubes in your mouth,
gasping for one more breath of air,
your fragile fist clenched in fear
before almighty Allah
No mercenary’s noose was placed
around your neck, as round Saddam’s.
You did not chasten craven tormentors
falling through the gallows

The task of writing about modern warfare is a daunting one for every new generation of poets. The psychological repercussions of war in 1999 are quite different from those in 1914, when the great revolution in war poetry began. If Yankevich is indeed among the great poets of our age, this is precisely why. He does this job admirably.

1 Response to Reflections on a broken world